Published on Dec 14, 2021
Michael Gotthardt’s research at the MDC looks at how the cardiovascular system and skeletal muscles function, with the ultimate goal of improving patients’ lives. To this end he is working to develop drugs for conditions such as heart failure with preserved ejection fraction, for which there is no effective therapy to date. A cardiologist by training, Michael Gotthardt conducts research into new drugs - for example, for patients suffering from cardiac insufficiency with preserved pump function.

A cardiologist by training, Michael Gotthardt conducts research into new drugs - for example, for patients suffering from cardiac insufficiency with preserved pump function.

Streams of words pour out of him hastily, and the last syllable is lost along the way. Michael Gotthardt is in his early 50s, slim, with salt and pepper hair, a stubble beard and glasses. He hurries across the hallway, opens doors and takes big strides through the work spaces behind these doors, all the while pointing to equipment, computer screens and small transparent boxes in which mice can be seen scampering about. Only outside, sitting on a bench under the shade of large trees, does he slow down.

Of the approximately 1,000 scientists at the Max Delbrück Center for Molecular Medicine in the Helmholtz Association (MDC), Professor Michael Gotthardt is one of the few with a medical degree. He originally wanted to become a doctor because, as he put it, “during my studies I didn’t have to restrict myself to one of the natural sciences – and because I could help patients.” He eventually hung up his white doctor’s coat: “I felt I could make more of a difference focusing on research.” His work at the MDC now primarily revolves around cardiac function – from cell to organism. His goal is to develop drugs that more effectively treat cardiovascular and skeletal muscle diseases. Just recently, however, he put on his doctor’s coat again to assist with the MDC’s vaccination drive.

From the operating room to the lab bench

Gotthardt studied medicine in Heidelberg, Berlin and Boston. His initial interest initially was surgery, but after a while it was too much craftsmanship. So he started a research project on the side. Working in the lab became more appealing to him than working in the operating room. He was particularly taken by the possibilities of gene therapy. He decided that’s what he wanted to do too – repair broken genes to cure diseases. He therefore applied for a PhD at the MDC with Professor Michael Strauss, a pioneer in gene therapy for genetic diseases and cancer. Under the mentorship of Strauss, he learned how to convert viruses into “gene taxis” capable of introducing therapeutic DNA sequences into tumor cells.

While still working on his thesis, he moved to the United States to do research at the Department of Molecular Genetics at the Southwestern Medical Center of the University of Texas at Dallas. While there he created a genetic animal model in order to study the receptors of the LDL receptor gene family. They play a key role in cardiovascular and neurodegenerative diseases. Subsequently, he received funding from the U.S. National Institutes of Health to set up his first lab at Washington State University. In 2002 Gotthardt returned to the MDC after he received the Sofja Kovalevskaja Award from the Alexander von Humboldt Foundation and the German Federal Ministry of Education and Research (BMBF) – and thus money to fund another lab. In 2007 he was awarded an associate professorship (W2 in Molecular Cardiology) at the MDC and Charité – Universitätsmedizin Berlin. Since 2016 he has been full professor on a W3 Professorship in Experimental and Translational Cardiology. 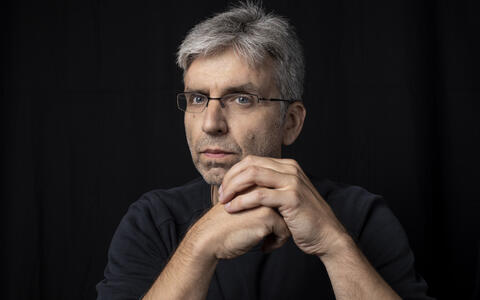 Michael Gotthardt studied medicine so that he would not have to choose a single natural science. He went into research because he felt he could make more of a difference there.

Michael Gotthardt studied medicine so that he would not have to choose a single natural science. He went into research because he felt he could make more of a difference there.

Gotthardt leaves nothing to chance. A perfectionist through and through, he plans absolutely everything from start to finish. For the MDC, he developed an electronic lab notebook based on the OneNote software in order to simplify the documentation of experiments and meetings. In his spare time, he likes taking photographs and goes to great lengths to get the composition just right. The same goes for artwork in scientific publications. “For me it’s important that the graphs and figures are uncluttered and easy to understand; they should be pleasing to the eye,” he says. “If I see a lot of work has gone into  the figures, I assume that the experiments have been planned and carried out just as carefully.”

His lab has invested a lot of time and effort into capturing images, movies, and the biology of titin. This protein – the largest in the human body – plays a key role in heart and muscle tissue. The scientists labeled the giant protein so that they could observe it in murine hearts. Until then it was considered the rigid backbone of sarcomeres, the smallest functional unit of muscle cells that continuously expand and contract. But the fluorescent labels revealed that titin is surprisingly mobile. It forms a dynamic protein network along the sarcomeres, where it wears out due to the repetitive mechanical stress. As a result, it is constantly generated, integrated, remodeled and degraded before being replaced by new titin. Using this and other methods, the team is investigating how muscles regenerate after exercise, how the particularly elastic titin in newborns differs from the stiffer titin in adults, or what role titin plays in the development and treatment of cardiovascular diseases. 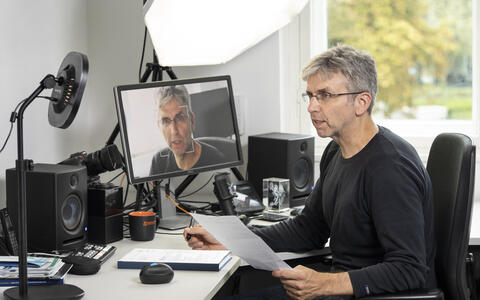 The giant protein also has a decisive influence on heart failure with preserved ejection fraction (HFpEF). In this condition, the heart walls become thicker or the amount of connective tissue increases so that the heart cannot adequately fill with blood. The heart therefore cannot supply the body with enough oxygen and nutrients, despite its largely normal contractile function. Half of all heart failure patients, especially older people and women, suffer from this condition. To date there is no effective therapy.

New drug on the horizon

That could soon change. Gotthardt and his team, together with researchers at Heidelberg University and the U.S. company Ionis Pharmaceuticals, have developed a therapeutic agent that interferes with alternative splicing, the process that precedes protein synthesis. Alternative splicing is a trick that nature has devised to create a variety of similar proteins from a single gene – such as the different isoforms of titin. This process is controlled by splicing factors. The researchers can now specifically influence one of these factors, the protein RBM20 – with the result that more elastic titin isoforms are produced and the heart muscle tissue becomes less. The team examined the therapeutic potential using human engineered heart tissue (EHT), which they grow from induced pluripotent stem cells. The shimmering pink gel-like tissue is stretched between two plastic rods like a rubber band, alternately contracting and relaxing – just like heart muscle cells in their natural environment. The plastic rods bend in synchrony with the rhythm of the muscle cells, which can be recorded. “The advantage of the EHT is that it can be produced again and again in almost identical form,” he explains. “This allows us to reduce animal testing.”

Gotthardt is also pursuing the search for additional splicing factors that can serve as therapeutic targets as part of an international research network that he coordinates together with Professor Leslie Leinwand at the University of Colorado Boulder. The Leducq Foundation supports the project with 7 million U.S. dollars. “Our goals include mapping the path to drug development and creating a database that will make it easier in the future to incorporate complex splicing information into heart disease diagnostics,” says the scientist. 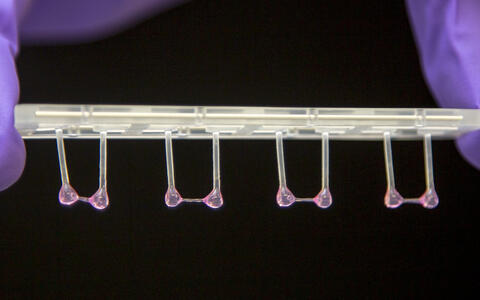 The artificial heart tissue can be stimulated to contract and relax against a resistance.

The artificial heart tissue can be stimulated to contract and relax against a resistance.

Titin also figures prominently in one of his own personal highlights: Gotthardt has succeeded for the first time in catching a glimpse of working muscle at the molecular level. He and his team created a mouse with an artificial enzyme called BioID inserted into titin. This titin BioID enables them to tag and track proteins in heart and skeletal muscle cells. As a result, researchers may be able to develop a more accurate model of the sarcomere and examine more closely the mechanisms underlying muscle damage, heart and skeletal muscle diseases and age-related muscle atrophy.

A bridge between research and clinic

I think very carefully about what topics I invest time and effort in. After all, I still want to develop one, two or maybe three more drugs. 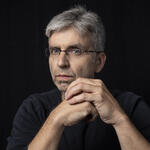 Throughout his career, Gotthardt has always tried to bridge the gap between basic research and clinical practice. Thus, he teamed up with the developmental biologist Professor Salim Seyfried to establish the TransCard Helmholtz Research School at the MDC in order to improve doctoral training. The doctoral students regularly shadowed cardiologists on their hospital rounds, “because it makes a huge difference if you measure the pumping force of the heart in an animal model or learn firsthand from patients how severely heart disease affects them.” He plans a similar approach to the doctoral training in the Collaborative Research Center dedicated to the study of heart failure, which he coordinates together with his clinical partner Professor Burkert Pieske of Charité – Universitätsmedizin Berlin.

Ideas come to him all the time, especially when he’s riding his bike and the humming of the wheels on the asphalt accompanies the thoughts in his head like a movie soundtrack. He then makes meticulous plans. “I think very carefully about what topics I invest time and effort in,” he says. “After all, I still want to develop one, two or maybe three more drugs.”