Published on Dec 10, 2021
This year 45 PhD students at MDC successfully defended their doctoral theses. At a graduation ceremony they celebrated the end of an important phase of their lives together with family, friends and colleagues. Countless hours in the lab, numerous experiments, many pages of scientific documentation and, finally, the years as a PhD student at MDC culminate in the defense of the thesis in front of a scientific committee. "I felt extremely released, happy and at the same time completely confused," says Dr. Krystyna Dudaniec about the moment when the committee members announced the grade of her PhD thesis. It was only in the days that followed that some others breathed a sigh of relief. One graduate even lost two kilos of body weight in a very short time. "I guess the stress hormones went down," suspects Dr. Inga Patarčić.

This is how Inga Patarčić felt as a PhD student.

This is how Inga Patarčić felt as a PhD student.

Krystyna Dudaniec, Inga Patarčić and another 43 doctoral students have successfully completed their PhDs since the end of 2020. They celebrated together with family, friends and colleagues at a graduation ceremony in early December. Once again, Corona meant that, the event took place virtually, with guests and graduates sitting at home on the couch, at their desks, in the lab in Berlin-Buch, or at MDC-Mitte / BIMSB.

As is the tradition at the MDC, each group leader gave a laudatory speech to the doctoral candidates present. For example, the guests learned that Dr. Carlos Vieira e Vieira has a special talent for sack races and that Dr. Marta Oliveira is considered the sunshine of the team. The PIs describe their graduates as smart and pro-active, but also as inspiring, cool and funny, as shown by a live poll during the ceremony.

The most beautiful doctoral hat and particularly good papers

An insight into the work of young scientists at MDC is provided by the awarding of the PhD Publication Prize. This year, five young researchers with outstanding scientific publications were nominated. Sponsors are MDC Freundeskreis and the Dr. Pritzsche Foundation. "For the jury, the impact factor of the journal was not the only decisive factor, but the body of the work itself," said Professor Michael Gotthardt, who guided the guests through the program. Finally, he announced three first-place prize winners, each of whom received 400 euros:

PhD student Victor Badillo Lisakowski has contributed to the development of a new therapy for heart failure. His publication in the journal “Science Translational Medicine” deals with synthetic nucleic acids that could in the future help patients whose heart chambers no longer fill sufficiently with blood during preserved ejection fraction.

Samantha Mendonsa has been researching Charcot-Marie-Tooth, an incurable neurodegenerative disease that inevitably leads to a gradual loss of mobility. The PhD student investigated the role certain mutations play in disease development – particularly during the production of proteins inside cells. Her paper in “Nucleic Acids Research” could be a starting-point for developing future therapies.

Dr. Christian Prinz and Christina Brischetto receive honorable recognition and 200 euros each for their publications in “ACS Sensors” and “Development”, respectively.

Krystyna Dudaniec also wins a prize; on this day not for her doctoral thesis on the Epstein-Barr virus, which led to a paper and a patent application, but the audience chose her doctoral hat as the most beautiful of all. Every year, MDC PhD students participate in the competition with self-made and creatively designed hats. 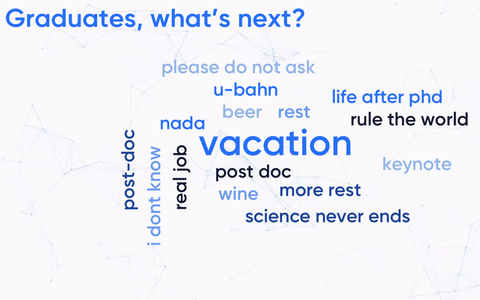 An Online Survey during the events shows many different answers to the question, whhat comes after graduation.

An Online Survey during the events shows many different answers to the question, whhat comes after graduation.

Some of the former doctoral students have already found jobs as research associates. Others, like Marta Oliviera, want to take a break, travel, and then decide what to do next. Not all of the graduates want to pursue an academic career. And, if not always as a researcher, one or two of the former PhD students will nevertheless remain with the MDC: Inga Patarčić, for example, now works as a data manager at the MDC.

The ceremony marks the end of an important phase in the careers of these young researchers. What they will miss most?, asks Dr. Sanja Drakulic, coordinator of the PhD program. The live survey clearly shows that for many of them it is neither their own research nor even Beer Hour on Friday evenings. What they really will miss are the friends from the lab and the interaction with others. "What I wish to take with me from this time are all the connections with like-minded people”, says Izabela Kowalczyk. “I feel that I have learnt the most from others and this is my lifelong lesson."

Towards a better understanding of heart failure