Through the pandemic with team spirit

Published on Oct 28, 2021
Since 2015, the Silent Hero Award has been presented every autumn at the Max Delbrück Center for Molecular Medicine (MDC). Instead of focusing on individuals, this year's award went to teams: teams that had a special impact during the Corona pandemic. 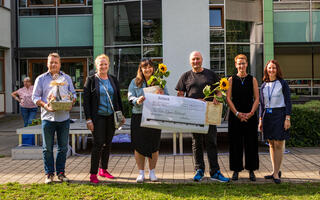 The special contribution of people who keep things up and running became particularly clear during the pandemic. It was precisely during this time that the commitment of those employees was and still is of such great importance. They secured research even during the lockdowns, they went above and beyond the requirements of their own jobs - and they didn’t forget those, who were hardest hit by the pandemic.

For this reason, the Society of Friends of the MDC decided to designate this year's Silent Hero Award as a “Corona Special”, as the Society coordinator Dana Lafuente explained at the award ceremony in early September. The aim was not to honor individual "invisible" heroes whose commitment to the MDC is indispensable. Instead the spotlight was on groups of employees who have played a crucial role in recent months. "Today we are honoring teams that would not have existed without Corona," said Dana Lafuente.

Three teams, one spirit: helping others - and keeping things going

The Silent Hero Award is usually given to three people and the prize money is divided according to the number of votes. This time round, all three teams received the main prize, honoring their different levels of commitment with 500 Euros each and a gift basket. Victoria Malchin and Rainer Leben stood up for people who were in need because of the pandemic. Victoria is property and building manager at the MDC in Mitte / BIMSB and Rainer works in the purchasing department. Together, they launched a fundraising campaign called "Let's help". The aim: to collect money for the “Deutschlandstipendium”, a scholarship for students at Berlin’s Humboldt University as well as an funding program for musicians, the Kinderhilfe e.V., and the volunteer fire brigade at Berlin-Buch. The campaign raised a five-figure sum.

Berlin’s Humboldt University and the Federal Ministry of Education and Research (BMBF) have awarded the MDC a certificate for sponsoring the university’s “Deutschlandstipendium” in 2021/22. Within the framework of the "Let's help" funding campaign, MDC employees had donated a total of more than 10,000 euros by the end of 2020. Among other things, the funds were donated to HU's scholarship program, which supports outstanding students.

"It was important to nominate recipients who are directly affected or who, in our view, have made important contributions to society," said Victoria Malchin, describing the goal of the campaign that she initiated together with her colleague Rainer Leben. Maxi Hiller and Jasmin Bonkowski work in the MDCs legal and IT departments. In the past months, they have also been "the backbone of the MDC vaccination campaign", said laudator Kirstin Bodensiek, head of the legal department. Almost a quarter of MDC employees were vaccinated at the company doctor's office. This was made possible by the participation a team of about 30 doctors and non-medical assistants from MDC and Charité - Universitätsmedizin Berlin. The two honorees ensured that everything ran professionally and smoothly: for example, that there were always enough vaccine doses available, but also that leftover doses could be administered immediately and that everybody who received a jab felt well looked after. As Kirstin Bodensiek said, the two prize winners always had team spirit in mind.

Another award went to Dr. Katja Fälber from Oliver Daumke's research lab and Margareta Herzog from Nikolaus Rajewsky's group. They represent the commitment of the test teams at both MDC sites. The Corona tests allowed everyone who wanted to to work on site, emphasized laudator Professor Oliver Daumke. This was especially important for young researchers who could continue their experiments, he said. He also underlined that this would not have been possible without the preliminary work done in both Markus Landthaler's lab and the Rajewsky lab. They established the tests used at MDC so that the highest possible quality was guaranteed. In addition to the three prize-winning teams, four departments or teams were also honored. Their efforts were critical in making sure that the crisis at MDC could be mastered so efficiently. The departments in question: Technical Facility Management, IT, and the staff of the animal facility, who ensured the well-being of the laboratory animals at all times. All team members received a voucher for an ice cream sundae at Café Max on the Berlin-Buch campus. A certificate and a gift basket also went to the Events Team at the Communications Department, which, among other things, ensured that events were quickly digitized.