Published on Oct 28, 2021
For the first time ever, the Forschungsverbund Berlin confers the Marthe Vogt Award on not one but two young female scientists: biochemist Dr. Sabrina Geisberger of the MDC and physicist Dr. Vittoria Sposini. 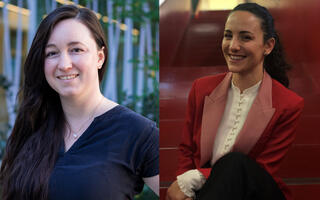 The moment she heard in a lecture by Professor Dominik Müller at Erlangen University that excessive salt affects not only blood pressure, but also immune cells – until then, no one knew exactly why – she was hooked. “I am totally fascinated by everything that has to do with nutrition, lifestyle and the immune system,” enthused Sabrina Geisberger. After completing initial studies as part of her Master’s thesis, she moved to Freie Universität Berlin at Dominik Müller’s suggestion, and began working on her doctoral thesis in the Müller laboratory at the Max Delbrück Center for Molecular Medicine in the Helmholtz Association (MDC).

She started out by isolating certain immune cells from mice. When these mice were placed in a high-salt nutrient solution, the scavenger cells (macrophages) changed their function. In a group of healthy test subjects who ingested an additional six grams of salt in tablet form every day for six weeks, the same thing happened: their monocytes, the precursor cells of macrophages in the blood, changed their activity.

Salt has adverse effects on health

In the long term, this fuels chronic inflammation, including cardiovascular disease with end-organ damage to the heart and kidneys, as well as joint inflammation and autoimmune diseases. Molecular biological analyses showed that the function of the mitochondria – the power plants of the cells – had been inhibited by the salt. The respiratory chain is disrupted and cells produce less ATP, i.e. the universal fuel required for “chemical work” that cells need for protein synthesis, muscle work, and much more besides. An effect that fortunately subsides after a few hours, as additional tests on volunteers showed after they had eaten a pizza (= ten grams of salt). However, continued excessive consumption of salt has an adverse effect on health. “The fundamental new finding is that such a small molecule as the sodium ion can inhibit a key enzyme of the respiratory chain extremely efficiently,” stated Dr. Stefan Kempa, co-author of the study published in the journal “Circulation”. Sabrina Geisberger is now continuing her research as a post-doctoral researcher in the Kempa laboratory.

Geisberger’s work sheds new light on a wide range of diseases. After all, salt has been shown to strengthen pro-inflammatory immune cells. “In the long term, this fuels chronic inflammation, including cardiovascular disease with end-organ damage to the heart and kidneys, as well as joint inflammation and autoimmune diseases,” the biochemist explained. “There is great potential for further research into this. For example: Which cells recognize salt – and why?” Her assumption is that not only monocytes and macrophages, but also other immune cells in the blood, the intestine and the endothelial cells of blood vessels react sensitively to salt. MDC Director Professor Thomas Sommer believes that Sabrina Geisberger’s findings will soon find their way into the textbooks.

In her doctoral thesis at Professor Ralf Metzler’s Theoretical Physics Group at the University of Potsdam, the second award winner, Dr. Vittoria Sposini, used calculations to refine physical models that go back to Albert Einstein – the Einstein-Smoluchowski equation, to be precise, which connects the diffusion of small particles with their mobility.

This is relevant to things very close to real life. Examples include determining how quickly a new virus can spread through the population or how rapidly an environmental toxin is likely to seep through the soil into the groundwater after a chemical spill. Vittoria Sposini will now continue her theoretical and computational studies as a post-doctoral researcher at the University of Vienna. “In my current research I plan to take advantage of the results achieved during my PhD on non-Gaussianity in heterogeneous systems in order to shed some new light on the slow dynamics typical of systems approaching the glass transition, focusing in particular on soft matter systems,” stated Vittoria Sposini.

An award in recognition of outstanding doctoral theses FVB has presented the Marthe Vogt Award to a young female scientist in honor of her outstanding doctoral thesis ervy year since 2001.

FVB has presented the Marthe Vogt Award to a young female scientist in honor of her outstanding doctoral thesis ervy year since 2001.

The Marthe Vogt Award is given in recognition of outstanding doctoral theses in fields in which the Forschungsverbund Berlin also conducts research. However, the work need not have been carried out at one of its institutes. The award commemorates German pharmacologist Marthe Louise Vogt (1903–2003), whose research made a significant contribution to our understanding of neurotransmitters in the brain, and especially ephedrine.

The award ceremony will take place at the Leibniz Headquarters in Berlin on November 2, from 18:00 to 20:00, during the Berlin Science Week 2021. It will also be broadcast via livestream. The link will be available here: https://www.fv-berlin.de/en/careers/marthe-vogt-preis