Published on Jan 13, 2022
Both researchers study communication, but at different levels: Dr. Stefanie Grosswendt and Dr. Alison Barker have been awarded European Research Council (ERC) Starting Grants. The prestigious grants provide about €1.5 million in funding over a period of five years. The labs of early career researchers Stefanie Grosswendt and Alison Barker, both set up in 2021, will get a boost from the ERC Starting Grants. The infusion of funding will enable them to expand their teams and channel more resources into their best ideas. The peer reviewers of the European Research Council look for novel approaches that might open up new frontiers and spur significant advances (frontier research). Candidates must also have two to seven years of experience since earning their doctorate and have promising scientific achievements to show for it. This year, 397 European scientists from a wide range of disciplines will receive ERC Starting Grants.

Dr. Stefanie Grosswendt leads a BIH junior research group that is part of the joint focus area “Single-Cell Approaches for Personalized Medicine” of the Berlin Institute of Health at Charité (BIH), Charité – Universitätsmedizin Berlin and the Max Delbrück Center for Molecular Medicine in the Helmholtz Association (MDC). Her lab is also affiliated with Charité’s Department of Pediatric Oncology and Hematology, headed by Professor Angelika Eggert, and is based at the MDC’s Berlin Institute for Medical Systems Biology (BIMSB). In the project entitled “Cellmates,” Grosswendt plans to investigate which cells are neighbors in tissues, how exactly they exchange information, and what the consequences of such interaction are.

Dr. Alison Barker was a postdoc in Professor Gary Lewin’s lab at the MDC. Since December 2021, she has been leading her own research group at the Max Planck Institute for Brain Research in Frankfurt am Main. Her project is entitled “Softchirp” and is inspired by the greeting sound naked mole rats make when they meet each other. She is interested in how neural circuits process the associated information and how such sounds help social units organize themselves.

What should I become and where should I go?

The ability of cells to change their structure or function becomes obvious during an embryo’s development. A whole organism gradually develops from a fertilized egg cell. “But for this to happen, each individual cell must first know what it should become and in some cases where it still needs to migrate to,” Grosswendt says. “That’s why a cell continuously receives signals from its immediate environment – we want to decipher this interplay and understand the role it plays in cellular specialization and thus in helping cells find their way.” The early career researcher is analyzing this delicately balanced process using cells from the neural crest of mouse embryos. These cells are initially multipotent, but they then develop into very different cell types – including the skin’s pigment cells, cells in jaw cartilage elements and adrenal medulla cells. If something goes wrong, neuroblastoma cancer cell may start to develop even before birth.

“We don’t know yet how complex cell-cell interactions can be and how this affects the fate of specific cells,” Grosswendt says. So she wants to further develop single-cell analysis technologies in order to be able to precisely identify neighboring cells in tissues, while at the same time determining which signals they send to each other and how they thereby influence each other’s properties.

“One and the same signal can elicit different responses depending on the cell type,” Grosswendt says. The cells subsequently transcribe different genes than they had before and in some cases even change their identity. “These principles underlying cell-to-cell communication do not only play a role during development or in healthy tissue,” she explains. “Cells within a tumor also influence each other, which can alter the genetic activity of some cancer cells in ways that make them more difficult to treat.”

ERC’s peer reviewers also saw substantial potential for medical research. “I was particularly pleased that they found our scientific approach as exciting as we do,” Grosswendt says. “We will be able to apply our methods to a variety of model systems like model organisms, organ-like microstructures called organoids, and primary samples from patients.” That is precisely why they are such a good fit for the joint focus area “Single-Cell Approaches for Personalized Medicine” of the BIH, Charité and MDC. “I am very grateful for the support I had in the run-up to the ERC competition – and to my PhD students whose initial data analyses were incorporated into the project proposal,” she says. “Now we are really getting started.”

The greeting calls of naked-mole rats 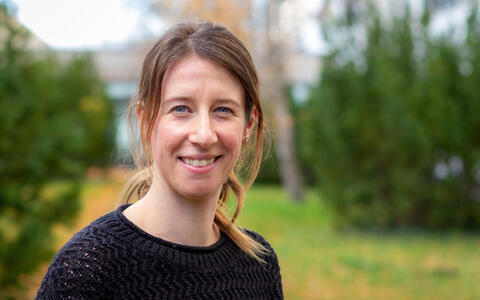 Alison Barker is also very excited about the grant. “Surprisingly little is known about how social information encoded in acoustic signals is subsequently decoded within brain networks,” she says. Although our capacity for language is an essential part of our ability to forge and reinforce social bonds. Humans are exceptionally good at communicating via vocal cues, yet many types of acoustic communication are found throughout the animal kingdom.

Barker studies vocal communication in the naked mole-rat, a highly vocal and highly social rodent which lives in large multi-generational colonies under the rule of a single breeding female, queen. In addition to their extreme cooperativity, these rodents are highly vocal with a repertoire with more then 25 distinct vocalizations comparable to that of non-human primates. “Naked mole-rats use greeting calls, soft chirps, to share information about individual identity and colony membership, “ says Barker. “Using these specialized vocal cues as a starting point we aim to understand the underlying neural circuitry that allows for the social recognition, and how these signals are adapted to changes in social situations.“

From Cell States to Function Dr. Stefanie Grosswendt
Head of the “From Cell States to Function” Lab
Joint focus area “Single-Cell Approaches for Personalized Medicine” of the BIH and MDC
Stefanie.Grosswendt@mdc-berlin.de

The Max Delbrück Center for Molecular Medicine in the Helmholtz Association (MDC) is one of the world’s leading biomedical research institutions. Max Delbrück, a Berlin native, was a Nobel laureate and one of the founders of molecular biology. At the MDC’s locations in Berlin-Buch and Mitte, researchers from some 60 countries analyze the human system – investigating the biological foundations of life from its most elementary building blocks to systems-wide mechanisms. By understanding what regulates or disrupts the dynamic equilibrium in a cell, an organ, or the entire body, we can prevent diseases, diagnose them earlier, and stop their progression with tailored therapies. Patients should benefit as soon as possible from basic research discoveries. The MDC therefore supports spin-off creation and participates in collaborative networks. It works in close partnership with Charité – Universitätsmedizin Berlin in the jointly run Experimental and Clinical Research Center (ECRC), the Berlin Institute of Health (BIH) at Charité, and the German Center for Cardiovascular Research (DZHK). Founded in 1992, the MDC today employs 1,600 people and is funded 90 percent by the German federal government and 10 percent by the State of Berlin.